Suitcases For Africa began in 2005 with a small shipment of 3 suitcases of school supplies and books to Ebi’s village of Itegero, Kenya. These were sent in memory of Ebi to the school where Ebi began her education, Itegero Primary School.

This shipment was a gift from children and parents of Miss Darlene’s Nursery School which Ebi’s sons had attended. When a video arrived showing the celebrations held at the school over the arrival of the suitcases it became apparent that the need was very great.

Teachers, students and parents of Christmas Park School, which Ebi’s sons had also attended then joined forces with the nursery school to direct more assistance to Ebi’s village school. Members of Ebi’s community at Beaurepaire United Church began to plan a visit to her village of Itegero in 2006 to honour her memory, to share in their loss and to show how much she was respected and loved by her Canadian community. Teachers from Christmas Park School and the nursery school decided to join them on the trip.

This diverse group of Ebis friends included teachers, librarians and health care professionals and became known as the “Kenya Girls”. Their aim was to link our two communities, village to village, share in their community life and to assist them in the areas of education and healthcare. This project soon touched the hearts of the surrounding community. Fundraising began and donated supplies poured in. 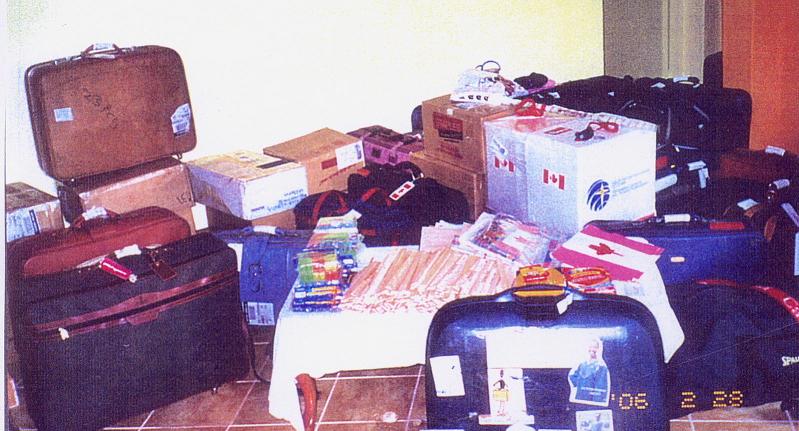 Suitcases and boxes after their arrival in Itegero, Feb 2006

Twenty seven suitcases filled with school supplies, clothing and shoes, 12 boxes of new and donated library books and seven physician travel packs containing $35,000.00 worth of medicine for the region were collected. All of these items were gifts of love from our community in memory of and thanksgiving for, the life of Dr. Ebi Kimanani Johns. Ebi became a catalyst for what was to follow.

What began as a one time visit in 2006 turned into a grassroots movement to effect positive change in needy Kenyan communities. Follow up trips were made in 2007 and 2009 with a wider community involvement and with more volunteers joining the group. With the shipment of a container of supplies in 2007 and an expanding number of Kenyan communities being assisted, our mandate became clear. A mission statement was drawn up and we became a Registered Canadian Charity in July 2010.

Though Suitcases for Africa began with and continues to deliver suitcases filled with educational and medical supplies, our major focus is now to assist the development of communities through various projects. These include providing clean accessible water, orphan feeding programs and educational support such as providing scholarships, school uniforms, desks, latrines, school supplies and the furnishing and stocking of school libraries. In addition we have recently begun to fund self – sustaining and income generating projects such as the raising of poultry and cows, growing of food crops and women’s sewing projects.